It’s 1:00a.m on the 10th of March, and Bret Easton Ellis, is sitting on Twitter musing about where Patrick Bateman is now. If we believe page 5 of his notes, he’s potentially “murdering David Beckham in an elevator in Manchester…”

For those who haven’t heard of him, Bateman is the protagonist of American Psycho, arguably one of the most terrifying books out there. It contains gruesome, very graphically described violence alongside quality men’s fashion advice, and in-depth analysis of popular songs of the ’80s. It’s unusal. It’s disquieting. It’s sold shrink-wrapped so super keen children in book stores won’t have their innocence torn from them via their eyes.

The film, starring Christian Bale, while excellent doesn’t even come close to capturing the quiet horror you get from reading the novel – the unshakable feeling that you have just witnessed terrible things. The possibility that such an individual could potentially exist – someone who calmly hacks up work colleagues and prostitutes while running an inner monologue about Huey Lewis and the News but who freaks out when someone has nicer-but-virtually-identical business cards – is genuinely frightening. But definitely worth reading. 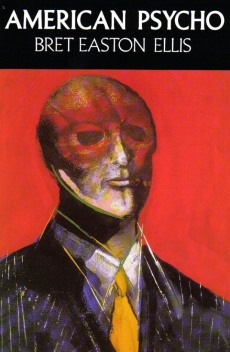 The idea of a sequel appeals to me. Firstly, it would be good to have something wallpaper over the film American Psycho 2. I’ll gladly admit to not seeing it, but based off the Scream-esque cover sporting Mila Kunis holding a sickle alone it looks tacky and has a ‘straight to VHS’ feel about it. The plot seems to be that of a cheap ’90s slasher flick, complete with babysitter murder and college campus terror. Reading the description of the ending, I’m almost shocked that the writers of Halloween: H20 didn’t sue for plagiarism.

Despite this, my real enthusiasm for a sequel is that like Bret Easton Ellis, I’m curious about where Patrick Bateman is today. If the author’s 40+ tweets on the topic in the early hours of the morning are anything to go by, it would be a pretty interesting book.

Patrick in 2012 “would be obsessed with “Stop and Stare” and anything else by the guy who wrote “Halo”…”. He might be “stalking Gavin Rossdale in a Bristol Farms in West Hollywood…” and there would be flashbacks to his life before the events of American Psycho took place, including “murders at prep school”, scenes from his teenage years and insight into his first murder; “it would have been his father’s mistress…”

This updated view into the serial killing protagonist would include Patrick hearing voices coming from his ipad and having an obsession with Rihanna. His “favorite movies are Hostel 2 and Chicago”, he “loves Celebrity Apprentice and Chopped and the Kardashian’s”. The “first murder is the #Kony2012 guy who Patrick finds out is Andy Dick’s boyfriend…”

Ellis also envisages Patrick getting strongly involved in social networking. He “would complain about spotify and the cloud and tumbler…but he would find victims via Blendr while listening to Beyonce and O.A.R.” On top of this,“Patrick would post pics of murdered girls on Facebook and either no one would notice or post “Fuck yeah””.

It was definitely interesting to see the kind of process Ellis goes through when making notes for a book – all of this was churned out in less than four hours. If a sequel does eventuate, I will be first in line – though I will still probably shrivel in horror at the prospect of little old ladies reading over my shoulder on the tram as I did with the last one.

Ideas, and possibly himself exhausted, Ellis signed off his frenzy of tweets with “Making new notes. Going to bed. Can’t believe this happened. Am I really going to start doing this? PB says yes…”

1 Response to AMERICAN PSYCHO: THE SEQUEL?