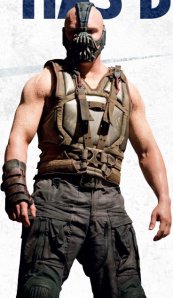 This dude knows what the deal is.

As one of the founders of a new pop culture blog, I’ve been doing a lot of reading through comics to ensure that I can hold my own when confronted with the convention crowd. There’s no way I want to be left dangling when some very intense individual asks me what  alternate universe line-up of the Justice League would be best placed to tackle Darkseid, or minutiae regarding Doctor Doom‘s current origin. I got credibility to build.

Mostly, I’ve been bingeing through Batman trade paperbacks. Because he’s the goddamn Batman, that’s why. Yes, I’m well aware that most of what I’ve written for this site revolves around him. Shuddup.

One thing that strikes me when reading through series after series involving Gotham City falling prey to an epidemic, overrun by homicidal cults, levelled by an earthquake and generally held to ransom by a revolving door of Gotham’s most heinous is that, well, maybe it’s just time to give up. Bulldoze the lot. Salt the earth. Hang a big sign at the city limits, reading ‘CLOSED’.

Gotham is a city that has been seen to be in a state of perpetual decline since its founding.  Recent mini-series ‘The Gates of Gotham‘ reveals that even in the early days of the city, corruption ruled supreme as prominent families vied to build the bridges that would allow the city to expand.

Since then, the rise of the Wayne family has pretty much mired the city in a state somewhere between oligarchy and kleptocracy. The Wayne family shells out for infrastructure, urban renewal and to create jobs, while the eternally, terminally corrupt city bureaucracy funnels the money away towards gangs, criminal syndicates and supervillians.

Surely the Caped Crusader has to realise that his devotion towards Gotham, as noble as it may be on one level, is actually keeping the city in a state of painful vegetation? Surely, as much as he’s driven to avenge the murder of his parents over and over, he realises that all he’s really doing is turning his beloved city into his own private game reserve?

This may be understandable, if not forgivable, were it not for the fact that Batman’s fame and reputation have turned Gotham into a one-stop shop for villians attempting to get to him, for their own twisted reasons.

Batman is physically resilient, well-resourced and extremely intelligent. He does, however, have a weak spot – the people of Gotham. Villians wishing to put the knife in need only murder a few civilians – usually in a fairly grotesque manner if they’re the Joker or his ilk – to send Batman into a rage. The fact that Batman has yet to be truly defeated by any of these villians just makes him that much more of a juicy target for the psychopaths he’s up against. What villian wouldn’t want to be the one to break not only Batman, but his heart as well?

In a sense, Batman is a willing and cognizant participant in a form of mass murder and genocide.

Gotham needs to learn to live without the Batman. One man, no matter how brilliant or strong, cannot hope to protect an entire city. The inhabitants of Gotham would be foolish to believe that he offers any form of protection, or would be able to drag the city out of the mire it finds itself in. Gothamites need to learn how to police and defend their own city, to learn a degree of independence without a paternal figure to watch over them.

Better yet, Gotham needs to disappear. The people need to resettle in Metropolis and Coast City. The buildings need to topple and ground into dust. Like any haven of parasites and vermin, it needs to be destroyed to ensure the health of the whole. The cursed ground of Gotham needs to stand as a testament to the folly of the kind of Nietzschean ideals that led to Bruce Wayne believing he alone could defend the city.

That’s why, when The Dark Knight Rises opens in theatres this year, I’ll be cheering for Bane, Ra’s Al Ghul and the League of Shadows. They know what is necessary.

What do you think?

Teacher, Humorist, Writer
View all posts by Mike Stuchbery →
This entry was posted in Comics, Film and tagged batman, gotham. Bookmark the permalink.

2 Responses to LETTING GOTHAM BURN: SUCH A BAD THING?