THE DIFFERENCE BETWEEN VERTIGO COMICS AND YOUR MUM

Posted on January 2, 2012 by Adam vanLangenberg

There are two types of people in this world. Those who know about DC comics and your mum. Out of the first type, there are those who are aware of the soul-poundingly vivid Vertigo imprint and those who like it when Superman hits bad guys. Out of the second type, there’s still just your mum.

Forget about the JLA. Forget spandex. Forget underpants on the outside. Chances are there is a whole world of comics outside of your experience that you really, really, need to pick up.

Vertigo is one of DC’s many imprints and it is by far my favourite. I actually hesistate when purchasing non-Vertigo books. This shot of my collection should make that clear, with the exception of some Conans on the top shelf, this is pure Vertigo:

This is where my heart resides. Sorry, wife.

Vertigo is aimed at the more mature, more sophisticated and more messed-up reader. If you want to see murder, torture, betrayal, black magic and down right nastiness, you are in the right place.

Every single Vertigo comics features the “Suggested for mature readers” warning on the front. This is despite what it’s actually about. A happy little story about a unicorn would have this warning. Of course, being a Vertigo story it would turn out the unicorn got hooked on crack after selling its body to save its only child from a group of hardcore glue makers.

I’m going to go through a few of what I consider to be “entry level” Vertigos. I believe that these are a good place to start your journey of unlocking the geek within. Also note, I don’t collect these series issue by issue, I wait for the trade paper backs to come out.

Imagine a mysterious event that causes every single living thing on the planet that contains a Y chromosome to suddenly die. Instantly. Now imagine that a dude survived. One guy left on a planet full of women. It’d be fairly misogynistic to write a story that focuses on him, right? Well, who cares? This is a cool series. This collection follows Yorick around the world as he tries to solve the mystery and reunite with his girlfriend Beth, last seen in Australia.

A lot of different issues are handled here, from what the world would be like with women in charge to dealing with literally being the most eligible bachelor on the planet. It has many moments of light-heartedness but there is a lot of depth here, too.

Also, Yorick has a pet monkey.

A terrible being known only as “The Adversary” has taken over the fairy tale lands, forcing a great number of them to seek sanctuary in our world. The humans live in Fabletown, New York, while the non-human characters reside in “The Farm”, upstate New York.

The series begins with Bigby Wolf investigating the murder of Rose Red, Snow White’s less famous sister. From there it takes off into an epic tale as the Fables try to return to their homeland and seize control from the Adversary. Don’t let the theme fool you, this isn’t a kid’s story.

There are a couple of spin-off stories, 1001 Night of Snowfall being particularly good. Jack of Fables is a light-hearted story about the adventures of Jack Horner which mingles with the main story line during a crossover special.

My only gripe with the series is that it should have ended after volume 11, War and Pieces. There are currently 16 volumes in print with a 17th on the way and the lack of a good story is starting to show.

Without a doubt, the greatest graphic novel series ever written. Ever. Don’t fight me on this. In this world, there are seven immortal beings known as The Endless. Destiny, Death, Dream, Destruction, Despair, Desire and Delerium (formerly Delight). They are personifications of the fundamental forces of life. They are also a family and the most powerful beings in the universe.

Sandman is about Dream, also known as Morpheus. He is in charge of the realm of the imagination. Anything created by thought is his domain. Dreams, unwritten novels and the gods are all under his control.

The story begins with him escaping the confinement of a mage who aimed a little too high and a little too dangerously. It follows him through the universe, to other realms and Hell itself. He constantly fights against powers that envy his title or simply wish to see him removed.

One of the most magnificent aspects of this story is its scope. We’re not limited to superheroes trying to save a city. Even saving the world is an act too mundane for Sandman. This comic focuses on the structure of reality itself.

It is an enormous story which is well worth every cent you may pay.

A spin off can be a double-edged paper cutter. On one hand, you have Joanie loves Chachi, on the other hand you have Lucifer. Gaiman introduced this version of the devil in the Sandman series but Mike Carey really took him in and made him his own.

This series takes off from the devil’s exit in Sandman. I don’t want to spoil anything here, just make sure you’ve read all of Sandman before getting into Lucifer. I was dubious at first of somebody doing a good job with one of Gaiman’s babies but Carey has done an amazing job.

This is the character I had been waiting for. Too many authors try to be clever and write the devil character as being merely misunderstood. Not so here. Carey’s Lucifer is selfishness refined. He has one goal throughout the entire saga and he will stop at nothing to achieve it. A master manipulator, power player and king of arrogance.

A true Viking saga. No helmets with horns or Hagar the Horrible. This is a saga based on proper research and damn good stories. There isn’t a continuing story in this series. Most of the volumes are single stories whereas one is a collection of shorts. Brian Wood has written some really gripping tales that I find hard to put down.

These aren’t pretty stories. The people are relentless, as is the land. The ways of the Norsemen are being slowly eradicated as the followers of the White Christ spread their message of penance and sacrifice. There is a longing in these tales. Something the people are willing to fight and die for. 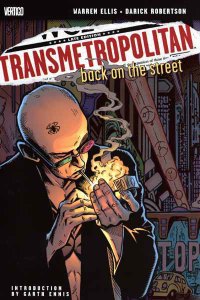 This is my last stop, and it’s a weird one. Transmetropolitan is without a doubt one of the most crazy, monstrous and bowel disrupting series to date. Spider Jerusalem is a journalist who quite simply, hates everyone. Sometime in the 23rd century he is forced out of retirement and begins a campaign of bile and virulence against The Smiler, presidential candidate.

Warren Ellis has come up with some truly awful ideas, all of them golden. We see amazingly advanced technologies being used for less-than-noble purposes. “Air Jesus” hover shoes, brainless human clones grown either for meat or prostitution and Jerusalem’s favourite weapon, the bowel disruptor.

It’s a shock and gorefest for sure, but there is some extremely deep writing going on underneath it all. One single panel involving Jerusalem talking to a pair of homeless young boys left me sitting without thought for some time.

Start at the top and work your way down. Don’t skip any. Let me know when you’re done. Enjoy.

4 Responses to THE DIFFERENCE BETWEEN VERTIGO COMICS AND YOUR MUM