THE AVENGERS, MY SOUL AND OTHER STORIES [REVIEW] 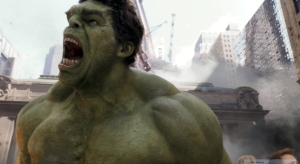 Hey! This movie is really something, you know?

I know this is the second Avengers review in a row. It’s a massive movie. Quit complaining.

In 2008, I and many others were sitting in the cinemas watching Iron Man for the first time. Being more of a DC comics kind of guy I wasn’t really expecting much. Maybe that was the right frame of mind to be in because I walked out of there completely blown away. It was stylish, classy and a little bit sexy. It also featured the best Stan Lee cameo to date (for the worst, see Spiderman 3. Or better yet, don’t).

My joy turned sour when I discovered that having walked out during the credits I had missed the most exciting part of the movie. Nick Fury appearing before Stark and offering him a place in The Avengers.

Every day since then has been underlined with the faint promise of what was to come. I sat patiently through The Incredible Hulk, ignoring my inner critic’s cries of “This sucks!” I played on my phone during Iron Man 2. Got excited again during Thor but then lost the mood during Captain America: The First Avenger. Despite the disappointments I never lost hope in the culmination of these films. The Avengers was going to change my life.

Ensemble films rarely work so I was legitimately worried, until word came out that Joss Whedon would be directing. I felt like I could breathe again for the first time in years. To this day that man has not put a foot wrong.

Today I went to the cinemas. I peed before going in. I sat down and watched some ads. I left, to pee again. My nervous excitement was getting the better of me. I started to get up to pee the third time but realised that the trailer I was watching was for The Dark Knight Rises. This would be the last one. The feature film was straight ahead.

We see bad things begin to happen and Nick Fury starting to gather his team. Some wonderful character introduction scenes took place, particularly Black Widow’s. The Hulk’s was equally delightful. Basically, the rest of the film was a blur. I forgot about my bladder. I forgot about the bad breath monster sitting beside me (not my wife, on the other side).

The film is pure Whedon. His trademark “hilariously interpreting the tough guy’s monologue” and “hahaha you were enjoying yourselves so here’s some pathos in your face!” manoeuvres were in fine form.

Loki was great as the bad guy. He was sly, he was manipulative and he looked cool while doing it. He had the biggest horns of any other character and the widest smirk. His arrogance was beautiful to behold and his teeth were very white and shiny.

In fact, I really enjoyed the conflicts in this movie. I was slightly disappointed in the Iron Man and Incredible Hulk films because of the bad guys. Iron Man fought other Iron Men. The Incredible Hulk fought another Incredible Hulk. In The Avengers the heroes not only fight a demi-god and his army of aliens but they also fight each other. It’s like watching a room full of divas with superpowers fighting over who gets top billing in the show.

Being a maths geek, I also appreciated the fact that the weapon of choice was an object known as the tesseract. In real life, a tesseract is a fourth-dimensional hypercube which doesn’t exist in real life (although the French gave it a go).

The dialogue and relationships between characters really works, particularly between Stark and Banner. Black Widow was more than the token chick and the Hulk was more than the token green guy. Thor was menacing and brooding and the Cap was, well. You know. Kind of boring. Hawkeye didn’t really kick into gear until the final fight scene but it was worth it.

The team fought and bickered and fought some more but their shared love for each other won through in the end. Pithy one-liners were flung about with reckless abandon and a few scenes had me laughing out loud. A lot out loud to be honest. I actually missed a few lines because of it. So did the people around me.

Stand-out character? The Hulk. And Banner. Both of them equally. Great lines, great character, great smashing. To be fair though, I can’t help but wonder whether that was due to his last two movie appearances being so ordinary. Was I giving him false credit simply because he didn’t suck? No, he was great. He was incredible.

I don’t need to tell you to see this film, because you already have. If you are one of the lonely few who haven’t, go and see it. Don’t make my mistake though, stay for the credits.

My soul belongs to Whedon now. It is in a happier place. With cool explosions.

1 Response to THE AVENGERS, MY SOUL AND OTHER STORIES [REVIEW]