GANGSTER SQUAD: A MADE UP STORY ABOUT REAL PEOPLE [REVIEW]

It’s 1949 in Los Angeles and while the young men have finally come home, the war is not over. Mickey Cohen (Sean Penn) is a Jewish boxer who has risen up the ranks of the mob, and has his sights set on taking over all of California. Sadistic and brutal, and with the manner of someone who has taken one too many hits to the head, he doesn’t care how many policeman he has to bribe or rivals he needs to murder to get what he wants. With Cohen’s money and influence trickling through politicians and the police force like blood down a gutter, what seems like the only six honest men left in LA band together to form a vigilante group to bring him down: the Gangster Squad.

The violence of the film has been a major issue, particularly surrounding the Aurora shootings. Originally featuring a scene where Cohen’s men appear by shooting through a cinema screen with machine guns, the trailers were pulled and the release date pushed as the cast re-assembled to film a new version of this, moving the location from a cinema to a Chinatown street.

Gangster Squad is without doubt a very brutal film. Within the first five minutes you see a man being torn in half by two cars. Despite this, cinematographer Dion Beebe does a remarkable job creating some beautiful shots surrounding this ugliness, making art of a cigarette lighter being flicked on, or of bullets passing by in slow motion.

Directed by Ruben Fleischer (Toto, I don’t think we’re in Zombieland anymore), the plot is basic, but enough to serve its true purpose – as a vehicle to allow seven really interesting characters and a token female to interact in extreme circumstances. It has a good premise, and both aesthetically and in terms of plot, Gangster Squad channels the noir films of the era it is set in.

The problem with filling a film with so many engaging characters is that there was not enough time to explore all their stories to any great depth. The only one we really get to know is Josh Brolin as the tortured Sergeant O’Mara, whose motivation is to return Los Angeles to the paradise he fought to return to, and to make a better world for his pregnant wife and unborn child. 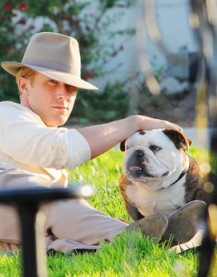 Ryan Gosling is strong as O’Mara’s partner Sergeant Jerry Wooters, demonstrating his range playing someone who lies somewhere between the player he was at the beginning of Crazy, Stupid, Love  and his nameless character in Drive. He initially appears to have given up his ideals in favour of a life of apathy and cynical comments, and despite many moments where it seems like we’re going to, we never find out what really “broke him”. Which is a shame. Maybe they should have taken time out from the romantic scenes he shared with Grace Faraday, a character which woefully underused Emma Stone’s acting ability to the degree that they may as well have just put a mannequin in a series of expensive looking dresses and stamped “I have unexplained emotional turmoil and no back story” in a speech bubble over its head.

The film also features a tortured gunslinger, his sidekick, a beat cop waging a one man war on heroin, and a wire-tapper. They work well together, and this film would have been equally interesting if this cast was performing a bank heist or planning an elaborate college prank. But they are not, they are fighting against a villain. A true villain; the kind who is mean to women, who will smash up nice things, and who will kill your whole family if he suspects disloyalty.

And here is where my main gripe comes in. Gangster Squad is advertised as being “inspired by true events” – one of a chain of movies sporting the same line. It’s clever wording, which on closer inspection actually means “while this film is loosely tethered in reality, what we’re really doing is making shit up about real people”.  John O’Mara was real. His wife was real. His partner was real. Mickey Cohen was real. He was a friend of Frank Sinatra, something alluded to in the film. He was a mob leader. The Gangster Squad was real.

The film is based on a series of articles and book by Paul Lieberman which by all accounts is fairly acurate. However, when it comes to the film it seems someone decided to take a group of real people and shoehorn in a whole bunch of violence and stylised motivations. In an article by Sierra O’Mara Schwartz she wrote “my grandfather shot one bullet in his whole career in the LAPD. And that was a warning shot”

It doesn’t really seem right to place people who actually existed in a predominantly made up plot, marketed in a way to manipulate people into believing it to be cold hard fact.

Josh Brolin did an excellent job of playing a John O’Mara who fired more shots than go down the throats of teenagers on spring break.  He did as good a job as Sean Penn did of playing a Mickey Cohen who is severely unhinged and actually pretty terrifying, that Jesse Eisenberg did at playing a Mark Zuckerberg who drinks appletinis, or that Ewan Stewart did turning Titanic hero First Officer William Murdoch into a corrupt officer who commits suicide out of guilt.

But it’s a good film. As a piece of fiction it is very watchable. And I guess a mob boss going to jail for tax evasion doesn’t really make for sexy viewing. Other than when Sean Connery is involved.

2 Responses to GANGSTER SQUAD: A MADE UP STORY ABOUT REAL PEOPLE [REVIEW]