The film lives up to its name. Repeatedly. To Wai-Cheung (Chapman To) is a film producer, and Vulgaria opens on him describing to a class of university students what his job entails. “It’s like being pubic hair” he explains, to the dismay of the lecturer. “Without it, you can get a lot of friction – my job is to ease that friction between people.”

In reality, Cheung is not a very successful at his work and the plot centres around his reluctant involvement in producing an adult film. Funded by an eccentric and volatile Triad boss named Tyrannosaurus (Ronald Cheung) who is obsessed with the (real) 1976 film Confessions of a Concubine, Cheung’s team attempts to re-make it as Confessions of Two 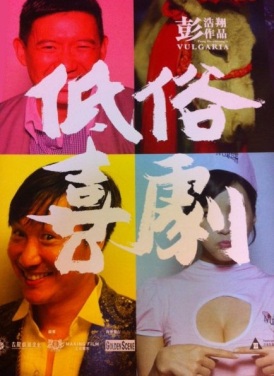 Concubines. Unfortunately, Tyrannosaurus has a list of conditions, including a role for his somewhat unconventional lover, and that the  star of the original film, a now somewhat older Siu Yam-Yam (played by herself) appear in the re-make. Naked. Already behind on his alimony payments, and with his ex-wife threatening to cut off all contact with his daughter, Cheung cannot afford to let this film be a failure.

Written and directed by producer, novelist, and actor, Pang Ho-Cheung (he’s kind of a big deal), Vulgaria is fast paced, entertaining, and a great example of the quirky nature of Hong Kong cinema. It balances humour with zaniness, and manages to be a convincing story about gangsters, sexually promiscuous actresses and the making of a porn movie despite violence mostly only being threatened, and all of the sex scenes being only implied.  It also blurs the line between reality and film through cameos from real life actors including Hiro Hayama, who amongst other things had a lead role in 3D Sex and Zen: Extreme Ecstasy.

From the moment the opening voice over tells you that if you’re easily offended to GTFO, you know this is not going to be one for helping little kids to brush up on their Cantonese – something the woman sitting behind me maybe should have taken note of when deciding to bring her five year old daughter to a movie where the lead female character is a busty young woman named Popping Candy (Dada Chen).

The dialogue is clever and rife with puns and “misheard” words; however unfortunately many of the subtleties of this are lost in translation, leaving some jokes to sound somewhat Biff Tannen-like. “Make like a tree and leave” wouldn’t make sense in the equivalent Cantonese; it works both ways. Regularly breaking the fourth wall, Cheung speaks to the audience about the nature of film, apologises for the film “burning”, and attempts to work out whether he really did have sex with a mule on Tyrannosaurus’ instructions.

7 Responses to VULGARIA (低俗喜劇): AS THE NAME SUGGESTS [REVIEW]