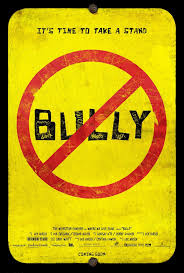 Kids are fucking assholes. I have always maintained this and now there’s footage to prove it. Obviously that statement is a tad broad – not all kids are assholes – but the barbaric history of bullying is so rarely captured on film and brought to attention I left this film with anger in my heart (and I will admit, a tear on my cheek).

Bully is a documentary by film maker Lee Hirsch about the nature of bullying in schools in America. It opens with the gut wrenching story of a teenager who had committed suicide due to a life of enduring constant bullying. Narrated by the boys’ father, the story hits hard – it’s a good opener. The film follows other outcasts who are unfortunate victims of the bullying plague that affects most of teenage-kind. The most interesting part for me was the parents of the victims trying to do something about it and being politely ignored by all authority around them (including and mostly, that particular school’s moronic principal), and it’s this insight into the bullying world that is the most potent – anyone who works with children everywhere should see this film. It’s not up to kids to be better people; it’s up to the adults raising and protecting them to do something about it.

As a film itself I didn’t think it was terribly good. There were many lingering shots of grief that felt too orchestrated and invasive, it grated with the strong subject matter (it doesn’t really need over dramatising, it does all the work for itself) and some of the conversations felt put on for the cameras sake. The few genuine moments were few and far between, but they were the most powerful – capturing the bullying in the moment or anything that comes out of the deadbeat principal’s ignorant-as-fuck mouth – and I thought there should have been more investigative journalism into the subject matter than the parade of victims and their families. That said, the image of the fractured shell of a mother of another suicide victim being held up at the funeral of her son will haunt me for a very long time.

It didn’t matter to me though, because I honestly believe the subject is strong enough to sustain interest and more people should see this film than actually will. The film was initially given an R rating in America and while the Weinstein Company pleaded for a reduction in the rating (it was restricting the very audience it was intended for!) it wasn’t until an angered public got behind the film and rallied to change the MPAA’s rating. That enough people care is promising, and shows that this film (and hopefully more films like it) matter.

Bullying affects most of us in our lives. If you weren’t bullied at school, it probably means you yourself were a bully, you might not have even meant it – the saying ‘kids will be kids’ is a cliché for a reason: kids are just inherently mean to one another. High school is the worst for anyone who is the least bit different. I had a horrible time most of my high school years – being the gay kid in a small homophobic town sure didn’t help things – so I know firsthand the dark power bullying can have over a growing mind. All we want to do is get through to the other side. It shouldn’t be that hard, but for some kids it is and I feel like we are in an age to make a difference about it (the reach of an individual’s voice in the technology era is astronomical), this film, while not a perfect spokesmodel, is at least something in the fight. Even the most imperfect of us can still have a strong voice.

Rather be dead than boring actuallyharry.com @actuallyharry
View all posts by H D Thompson →
This entry was posted in Film, Reviews and tagged Bully, Documentary, Lee Hirsch. Bookmark the permalink.