The line was snaking out around the building, and yet even more people were arriving. It was 10am, and neither hot nor cold. Five people ahead of me, Captain America was patiently holding his son’s hand. Two boys dressed as stormtroopers ran past.

I didn’t know there were this many people in Adelaide.

There was anime, comic books, board games, computer games, vast amounts of every kind of geeky merchandise you could ever want, all of which was scattered in amongst the guests, panels and special events, all of which which were happening throughout the day.

Attendees included couples, teenagers, reluctant drag-alongs and families – including baby Hulk and  baby Yoda who stared around peacefully from inside their prams. There were also an inordinate number of people dressed as Link.

There were costume societies, Firefly societies, and stalls where you could play Yu Gi Oh. In one corner there was a life-sized Tardis – metres away from the functioning remote controlled R2D2 which was getting more photo time than the man dressed convincingly as Rorschach. One girl dressed in a gas mask looked as though she’d stepped straight out of Doctor Who’s ‘The Empty Child’.

There was also a strong hint of The Big Bang Theory everywhere – from t-shirt stalls having entire sections devoted to Sheldon-themed t-shirts to the pop culture quiz requiring a contestant to sing ‘Soft Kitty’ in its entirety. I lost count after spotting 23 men wearing ‘Bazinga!’ t-shirts.

The full list of guests can be seen here, but the main drawcards for me were Sean Astin and Jewel Staite. 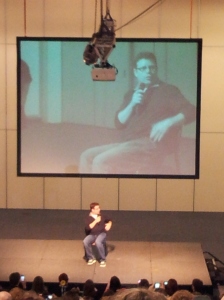 Not dropping any eaves.

In his (extremely crowded) panel, Astin recounted his time on the Lord of the Rings set, and then spoke fondly of all the characters he’d played in his long career. Some very complex, some…less so. He explained how irrespective of film quality, he loved each of his roles because of what they represented to him in terms of where he was in his life when he played the role. When asked what he thought of them, he liked to think of them in terms of how they would all interact in a room together. He bantered well with the crowd, and, right near the end cracked out at least one “Mr Frodo!”

Jewel Staite’s panel the next day was even more crowded, again underscoring how sad it is that Firefly got axed. As a result of the unprecedented success of the event, seats ran out half an hour before the panel started. However, at least fifty people stood, craning around the side of the bleachers for the entire hour, listening to Staite talk about her time on Stargate Atlantis, as she joked about her food blog and  about Nathan Fillion’s undying plans to resurrect Firefly. She handled some left field questions very well (“hey, so, how did you gain weight to play Kaylee?”), always veering them towards somewhere interesting or funny.

While the event was great, the fact that the numbers had been very badly misjudged did mar some of the events. Panels didn’t accommodate anywhere near enough to match interest, and some people waited in line for close to two hours in order to gain entrance to the event itself.  However, as the inaugural event, I guess this is to be expected – things to be ironed out before next year.

The next stop for Oz Comic-Con is Melbourne, held over June 30th and July 1st. It probably won’t be worth going to though, as guests will include such small time names as Patrick Stewart, Armin Shimerman, Tia Carrera and Stan Lee.