THE MELANCHOLY DEATH OF OYSTER BOY & OTHER STORIES [REVIEW]

If Tim Burton were given the opportunity to redesign the world, I imagine it would look a lot more animated. Trees would be spindlier, darkness more sinister, colours more garish and in bubble-gum shades; ghoulish topiary figures would prance, bend and stare eye-lessly from every lawn on the never-ending windy street of suburbia.

There is no doubt about the fact that he has a distinct style, and all of this shines through, in a sun-through-a-grimy-window sort of way, in his self-illustrated anthology of poems The Melancholy Death of Oyster Boy & Other Stories.

The slim, 113 page volume is populated by a hodge-podge group of misfits.  Most of the stories are simple, such as “The Girl who Turned into a Bed” and “The Boy with Nails in his Eyes”. What you see it what you get.  Others have darker twists, such as the title’s “Melancholy Death of Oyster Boy”. All of them are laced with dark humour and are illustrated by Burton.

It’s quirky, slighly macabre, and tinged with generous hints at the vast range of human shortcomings, though the latter is always explored through a veil, using monsters and fantasy instead of realism.

I don’t think I like it simply because of its author, though maybe I am somewhat subconsciously influenced by his other work. Stories like “Staring Girl” should not be as entertaining as they are. The words are simple, and the rhymes are basic. However, when coupled with the eccentric illustrations, “giving your eyes a rest” now no longer means lemon slices and a nap, it means this: 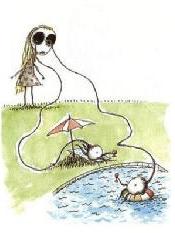 Eyes having a "well-deserved rest."

This book has been around since 1997. I however didn’t know that it existed, and so came across it purely by chance late last year when browsing an unfamiliar store. The part of my brain which stores 10+ viewings of Edward Scissorhands and contains a muted Big Fish big disappointment zone kicked into gear and said it was either this or buying an angora sweater.

I recommend reading it. Ed Wood.