NOT ENOUGH LORD OF THE RINGS IN YOUR DIET?

Posted on February 22, 2012 by Adam vanLangenberg 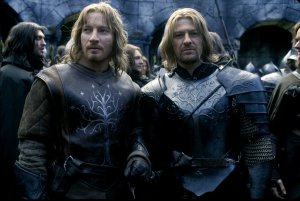 Confession time. I have never read Tolkien. I have tried and failed several times, they are too much of a slog for me to get through. Consider this fact when I also point out that I am currently reading a book called “The Fabulous Fibonacci Numbers” and I am riveted. The movies didn’t really grab me either. They were very pretty and I enjoyed the many, many swords but they didn’t do much for me. I didn’t care too much about the characters and it bugged me that Gandalf can summon and ride giant eagles yet never thought to just fly over Mount Doom. Still, the stories are set in a very rich world full of detail and history. Something like this screams for more material to be created. One area which has been covered to death is board games. At my latest count there are over 40 different board games set in the LotR universe. Of course, a few are just variations of pre-existing games, such as Lord of the Rings Monopoly, Stratego and Trivial Pursuit but most are stand-alone games. I have neither the resources nor the inclination to play all of them but I am prepared to discuss what I consider to be the best 5.

War of the Ring

Want to play a game for at least three hours? With only one other person? Who you are desperately trying to destroy? That costs around a hundred bucks? Well, War of the Ring will probably suit your needs.

One player takes the part of the Free People while the other strokes his goatee and plays the role of Sauron, Evil Lord of the Pixies or something. They take it turns to sneak around, bash each other and generally act like petulant teenagers. There are a huge amount of strategic decisions to be made, dice to be rolled and rules to be learned. It’s not a simple game by any means but it is deep. Deep as the Mines of Moira. Was that reference correct? I don’t even care.

A feature that I like involves promoting some of the characters. Gandalf the Grey can become Gandalf the White if certain things happen and if Strider gets to Minas Tirith he can become Aragorn, King of the Lizards.

Lord of the Rings: The Confrontation (Deluxe edition) 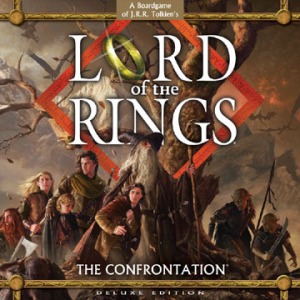 Ever played Stratego? Well, this is Mega Stratego for the LotR geeks. Like the game above, it’s a two player game, the Fellowship vs. Sauron. It’s an abstract game, a type that can often feel like bare bones with a thematic overlay. This game handles that factor quite well and actually creates a half-decent sense of the LotR universe.

It’s simple to learn and plays very quickly, nice for a break between Star Trek marathons and actual marathons. In fact, it’s probably not even necessary to be a Lord of the Rings fan.  If you enjoy bluffing and trying to deduce other people’s motivations then you might just enjoy this one.

Of course, if you have a larger group of friends you might just want to play poker with them, but I’m going to go out on a limb and suggest that most hardcore Tolkeinists don’t suffer from that problem.

Lord of the Rings

This game is over ten years old and was one of the first game to introduction the concept of ‘cooperation’. Most civilisations had never heard of it and it soon proved to be revolutionary. 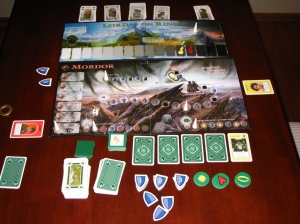 You control a group of hobbits who embark on a wondrous journey of imagination and death. As you progress through the tale the hobbits will start veering towards the darkness while Sauron creeps closer. If Sauron ever catches up then it’s game over. The sting of loss is lessened though because you lose together as a group.

There’s a good amount of decision making involved here, time is of the essence but sometimes you just have to take the longer road and claim the rewards while risking Mr. Sauron sneaking up on you from behind.

What appeals to me the most about this game is how it focuses on the gradual corruption of the ring-bearer. The game starts with the hobbits in a fairly genial mood but things begin to darken quickly and the tension rises.

Gotta say, this is my favourite out of the five. It’s both a cooperative game and a “punch your opponent in the eye” game. One lucky player takes on the role of Sauron. They spend their time spreading evil creatures throughout the land, corrupting the humble cities and spoiling movies for their friends. The other players pretend to be the good guys. Not the famous ones from the movies but close enough that you couldn’t tell the difference. They may be characters from the books, I don’t know. I don’t care. 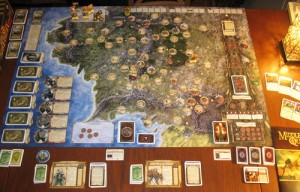 This game is set during the period where Gandalf is off doing research on the Ring. We know that Sauron survives because otherwise he wouldn’t be in any of the movies. The point of this game is to basically slow down his crap as much as possible. It’s a very detailed game and it looks beautiful.

The rules are quite deep and it might take a bit of time to really get the feel of the game. This probably isn’t for newbies but you might like it anyway, just for the pretty pictures.

The Lord of the Rings: The Card Game

Sorry, another two player game. At least this game lets you play with each other. Well, play on the same team at any rate. This one’s a card game, probably because of its title.

Two people (I assume) join forces and try to fight monsters and save the day. You’ll need to cooperate and plan your battles wisely, this is one of those annoying games where the slightest error can cost you everything. Well, cost you thirty minutes at least. 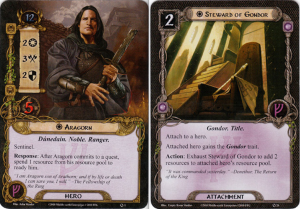 You each control a host of characters with their own special abilities and randomly draw monsters from a deck to do battle against. If you’re lucky the monsters will build up in strength at a reasonable rate. If you’re unlucky you’ll be fighting King Kong in round one and it’ll be downhill from there.

This is a great game for thinkery type people. You and your partner really need to consider every option available to you and plan things out. You don’t want to make a silly move and spend the rest of your night suffering the glares of an angry Hobbit wannabe.

Comic book defiler, board game desecrater, unwanted felon. @vanAdamme
View all posts by Adam vanLangenberg →
This entry was posted in Gaming (Board), Reviews and tagged lord of the rings, middle earth, sauron. Bookmark the permalink.