The Zombie invasion is coming, and there is no-one who can save us. Last Friday I risked scorn and went to see Star Wars: The Phantom Menace in 3D. I’m not sure if I can call it a mistake, but it certainly underlined some disquieting truths.

I originally saw The Phantom Menace when it was on tv. I taped it, and thought it was pretty much the greatest thing ever, right up there with the Charlie’s Angels re-makes and Tazos. I’m going to use being twelve as an excuse. Since then, I hadn’t watched it again, but the memory that remained was that of a pod race tinged with an overwhelming sense of ‘this is a thing that I like’. Over the years, I built up the impression that not many shared my enthusiasm for the film, hearing things such as ‘nothing happens’ and that it is ‘a blight on the Star Wars franchise’. Hrumph etc.

This provided my main motivation for going to see it again. I missed seeing The Phantom Menace in a cinema the first time round, and felt that this would be a good way to defend the film’s honour. Unfortunately however, you can’t take your rose coloured glasses into a 3D film, and what ensued was one of the most tedious and eye-closing 133 minutes of my recent life.

We were planning to attend the 9:30p.m. session on the Friday night after the film came out. There was a long line for tickets, and we stressed we wouldn’t get seats. We needn’t have worried, as apparently everyone was there for Chronicle and we walked into a near empty cinema. Behind us sat a group of five men, discussing what level of devotion they had to this film.

Man 4 and Man 5 busied themselves with eating popcorn and Maltesers.

The film began, and as I saw the word ‘taxation’ come up on the screen, I realised that I had made a terrible, terrible error. Whilst yes, it was kind of cool to see the glory that was Liam Neeson’s wig, the blatant racial stereotyping as well as the origins of C3PO and R2D2, that wasn’t enough to drown out the non-stop sand and trade talk that just kept on keeping on. Plus, I couldn’t help being slightly creeped out by the budding relationship between Padme and a pre-pubescent Anakin.

As I tried to pass the time by playing ‘spot Keira Knightly’, the words of a friend who had refused to come along for the group suffering session fixed themselves firmly in my mind: “Sorry man. 3D can’t mask how shite that movie was.”

When the credits finally ran on my decade-long delusion, a man at the back shouted “STAR WARS!!!”. I’m not sure what his motivation was, but I suspect it was something to do with a mixture of relief and despair for time and youthful innocence lost. 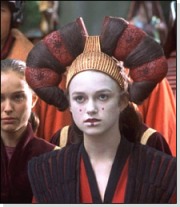 For the clincher in this Friday night well spent, I actually detest 3D for the most part. I would have been far happier seeing the film in a 2D re-release. Despite the fact that 3D doesn’t translate well when retroactively added to film, it seems as though we are in for a tidal wave of past successful films being brought back to screens in this format.

I assume that another five episodes of Star Wars are currently being tweaked. I’m not sure what George Lucas has more of these days – money, or letters from people debating the minutiae of who shot who and asking about fictitious language syntax.

3D is not that great. Yes, there is slightly more visual depth, but do we really need that in things like The King’s Speech? This is a technology that is becoming horribly over-used. While maybe it can add something to Pixar films, Tim Burton movies and films in the vein of 300, in my opinion all it really adds is $4 to your ticket price and a headache to your day.

Normally, if you are seeing the un-dead at the cinema, they are confined to the screen. Now, we can look forward to seeing things like Titanic dredged up with visual depth for increased shallowness. Everyone said “at least the pod race will look good in 3D”. They were wrong. This is not the 3D of the IMAX era. Instead, it aims to bring “more realism”. When coupled with the fact that in this case it was added as an afterthought, it looked pretty much the same, and at least one person in the session didn’t have the opportunity to see it anyway, as they had made the wise move of being asleep.

To put it in the words of The Phantom Menace itself: “Do you hear that? That is the sound of a thousand terrible things headed this way.”

3D leads to anger. Anger leads to hate. Hate leads to suffering. Next stop: The Dark Side.