Tim Burton returns to the short film he made in 1984, with feature length claymation fable, Frankenweenie. It’s family friendly Frankenstein, as a science genius boy resurrects his dog after it gets tragically killed. There is the fight between science and rationality and good and bad and life and death, and in the end it’s really sweet.

OK. So I’m going to start with the good…

I LOVED that it was in black and white. This might be the main detractor for most people but I thought it was a bold move and beautifully fitted the film’s odd story. The characters that riddle the film are delightfully odd – the frustrating moron Igor, the intense science teacher Mr Menace and the woeful neighbour Elsa – and typically Burton-esque in appearance, it was great to watch these grotesque people flit about town. Burton has a good imagination (he has his haters, but you can’t deny he has more imagination than most out there these days) and there were some great scenes, nice humour and a nice message. A lot to like.

Ok, now for the bad. I didn’t connect with the main character at all: he just bobbed about and didn’t really have a lot to do. The poor little geeky science boy, outcast and alone and all he has is his science and his dog. Boo hoo, give the kid some substance for shit’s sake. While I did like the oddness of the story, it was as if it wasn’t odd enough – it should have gone further. I get that it’s Disney and they need to keep it family friendly, but let’s face it – death is a hard one to dance around. So while they should have had Thriller they had the Monster Mash, or the Hot Potato. Unlike the sublime Corpse Bride where all the weirdness was allowed free and did so with dreadfully dark abandon, here it was dipping its toe in politely, curtsying before the crowd. I feel like Burton would have wanted more weirdness but his tie to Disney held him back. The ending in 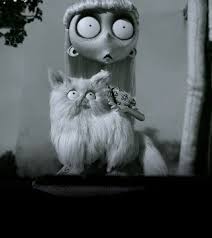 particular grated with me – far too saccharine. The character of the teacher Mr Menace (supremely voiced by Martin Landau) was fantastic and he had the best line of the film – at a meeting to condemn his science teachings, he opens, “Ladies and gentlemen, I think the problem here is…you are all very ignorant. No, sorry ignorant isn’t the word, maybe stupid?” – and then he disappears! He was the voice of scientific reason and a great boost to the clutter of weird kids and judgemental adults, he should have got more screen time than he did. Another issue I had was the voice cast. I went in not knowing who anyone was and about halfway through I could pick most of them, and I knew that Catherine O’Hara and Martin Short were doing more than one (the end credits confirmed this, they each voiced three people), so throughout the film my thoughts kept dashing off to this. Why? Was the casting budget so sparse they had to triple up? Was no-one available for the job? Did someone think we wouldn’t notice? Whatever the reason, it bugged the shit out of me and was an unnecessary distraction. Also, Winona Ryder has a distinctive voice, I like it, I like her and I always have, but when she lends her voice to a young teenager, it sounds like Winona Ryder, not a young teenager. Kids may not notice, but anyone who lived through the 90s would notice, and it will annoy them.

Another thing that irritated me, was Frankenweenie himself. Sure, he was a cool dog and he was the kid’s best friend, but when he died everyone was going on about how he was the greatest dog ever. He was OK.  He was no Lassie or Dug from Up. He stressed me out with his disobedience (he dies by refusing to sit still, and when he is reanimated and told to stay put so no one sees him, he runs away. AARGH!!) and he bugged me, which in hindsight is sad. I did however really like his relationship with the dog next door, the one saving grace.

In whole it is a nice film, it should have been a weirdly fantastic film, but nevertheless, a nice film. It may be a bit too dark for the target audience, then again the cinema I saw it in was me with 5 other single middle aged men so I have no idea what the target audience is. The 3D was absolutely mindbogglingly unnecessary, but the animation was top notch. Too safe for my taste, I like Burton when he is taking risks and venturing down the path less travelled, not caring if he makes any money or not. So while it’s not Burton’s best outing, it’s still a good time, certainly better than the embarrassing mess that was Alice in Wonderland, but Edward Scissorhands it ain’t.