FROM UP ON POPPY HILL [REVIEW]

Miyazaki father and son work together to make the latest Studio Ghibli film, with Goro Miyazaki directing Hayao’s screenplay and it’s an interesting partnership considering the troubles the two had on Goro’s first feature, Tales From Earthsea.

A teenage schoolgirl, Yumi, works tirelessly to support her family after her sailor father went missing at sea in the Korean War. Her mother is off working in America and she resides in her family house with her grandmother, younger sister and brother, and some boarders. She is the buttress of the family and keeps the house running smoothly. Her determination and love of her father is evident in her morning flag raising ritual – some flag signals he taught her before he left. At school Yumi joins a band of schoolboys in a fight to keep their beloved clubhouse (a beautiful old building very worn down over time and now housing the many clubs – astrology, philosophy, newspaper etc) from the wrecking ball of local government, and here is where she meets Shun, and the romance aspect of the story begins. 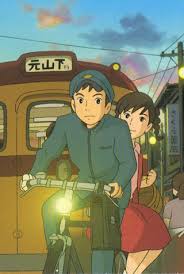 The set period is heavy with the current happenings of the time. Set in 1964, the Korean War wounds are still fresh, and Japan tries to busy itself with the impending Toyko Olypmics, an air of pride of place is evident, and mirrored nicely in the boy’s fight for their clubhouse. Yumi is treated with respect by the older generation as her fathers’ disappearance in the war is well known, and her budding relationship with a young boy has links to her fathers’ accident.

This is a sweet film, typical from the hand script of Hayao Miyazaki. It is at times quite funny, and at others unflinchingly romantic, and as with anything Ghibli produces, it looks beautiful. The only thing I had issue with, is that it should have been better. It felt disjointed and at times all over the place, not knowing which button it wanted to press. I have complete and utter faith in Hayao as a director – he made some of my ultimate favourite films, he is no less than a genius in my eyes – but his son Goro is leagues away from his father’s skills and status.  When production went through for Tales of Earthsea, Hayao decided he didn’t want to direct it, he would be producer and keep an eye on it, but he disagreed with the studio’s decision to make Goro director – he had never made a film before and Hayao believed he wasn’t ready – so he stepped down as producer and refused to have anything to do with the project. The proof was in the pudding and that film was a great mix of ideas that didn’t fit together, but probably could have under better direction. This, Goros second film as director, shows that he still has a lot to learn, but at least his father stuck around to lend him a hand. If Hayao isn’t going to direct any more films, at least he can stick around to teach his ways to his son, there’s something comforting in that.

From Up On Poppy Hill isn’t perfect, but it is very sweet and likeable, and anything Studio Ghibli produces generally runs rings around any of the Ice Ages or Madagascars littering todays animation scene.

Sidenote – this film is currently doing the rounds as part of the REEL Anime Film Festival, but will get a more general release toward the end of the year, and probably with an English Dub as well as English Sub option, check it out when you can.

Rather be dead than boring actuallyharry.com @actuallyharry
View all posts by H D Thompson →
This entry was posted in Film, Reviews and tagged Anime, Goro Miyazaki, Hayao Miyazaki, Studio Ghibli. Bookmark the permalink.