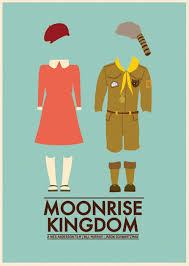 Let me make something clear from the start – I love adventure. In whatever form any sense of adventure is a winning ticket to my heart. I feel like Wes Anderson knows this and made this film for me, and in turn anyone else with the same adoration. I know some people are truly anti-Wes (too hip, too kitsch, way too self-aware), but I adore him and this film summed up everything I wanted when I was a child and still want now. There is adventure, longing, a touch of drama and love in its truest and most awkward form.

What kind of bird…are you?

Set in 1965, it tells the story of a young outcast orphan scout boy who meets and falls instantly in love with a young girl. They make plans to run away and with his scout skills, they cross their island home and set up camp in a haven they baptise Moonrise Kingdom. They are pursued by the relentless Scout leader and troupe in tail, the local law enforcement and the girl’s parents. Each character has its own story to tell, even the smallest – there are no superfluous souls.

There are elements in this movie that will resonate with many people. As a kid all I wanted to do was run away on an adventure, cast myself to the world, and that this boy was living my fantasy was like watching a dream I once had. The love of these two kids is heightened by the lack of love in the adult world – it’s a lovely irony. There is Wes’ trademark wit and oddball humour (for lack of better clichés). There are lines that smash all others out of the water – “I love you but you have no idea what you are talking about”, among many, many more. There is the awkwardness of being a kid beautifully juxtaposed with the precociousness of a Wes Anderson child character. The costumes and the music are era appropriate and pitch perfect. The setting is beautiful and as always, well shot. The acting is top notch (with a cast made up of the likes Frances McDormand, Tilda Swinton, Edward Norton, Bill Murray, Jason Schwartzman and Bruce Willis, it’s hard to go wrong) but it’s the two newcomers (Jared Gilman and Kara Hayward) that steal the show. I believed in their outcastery and love for each other, and I cheered for them till the very end. It’s a fun ride from the get go – allegiances change, there is a shock death, delicious cameos and the typically dramatic ending overthrows its cliché with just enough Wes Anderson oddity, and you realise why people love this man so much.

I am hearing a lot of negative talk about the film’s sexualisation of the children, which I wanted to touch on. There is a scene in particular on the beach with the kids (he 12, she 11) are in their underwear dancing and experiencing their first kiss and they each cop a feel of each other, then spend the night in the tent together. It was genuinely awkward to watch, but if you think about it, it’s awkward to experience. Some argue that they are too young to be doing such things and to portray it on screen is to sexualise children in a perverse way, but I disagree. Children of all ages experience sex stuff in weird ways, even something as slight as this. These two kids were way ahead of their age (he smokes a fake pipe and she dresses like a 60s pin up, with woeful eyes preluding her angsty years to come) and any two precocious kids of the same age in real life would have probably done the same kind of experimenting. They are two old souls trapped in youthful bodies, falling deeper and deeper in love, progressing rapidly, but naturally along the relationship scale. They were caught the morning after by the search party and it is quite obvious that what they did was frowned upon, and really – what rebellious kid obeys rules and structures? If you’re going to plan to run away with the love of your life (that’s what love feels like at 11, if you remember) the last thing you would do is adhere to society’s expectations of what you should or should not be up to in your haven, your utopia. I could be wrong, maybe it is perverse and some people are enjoying it way too much, but that’s the fault of the viewer, not the film. In my humble opinion.

Moonrise Kingdom was beautiful and exciting and hilarious and fun. I left with a huge smile in my heart and, really, who doesn’t want that? I cannot recommend it enough.

Rather be dead than boring actuallyharry.com @actuallyharry
View all posts by H D Thompson →
This entry was posted in Film, Reviews, Uncategorized and tagged Moonrise Kingdom, Wes Anderson. Bookmark the permalink.