DANGER 5 – GETTING STRAIGHT TO THE BISCUITS 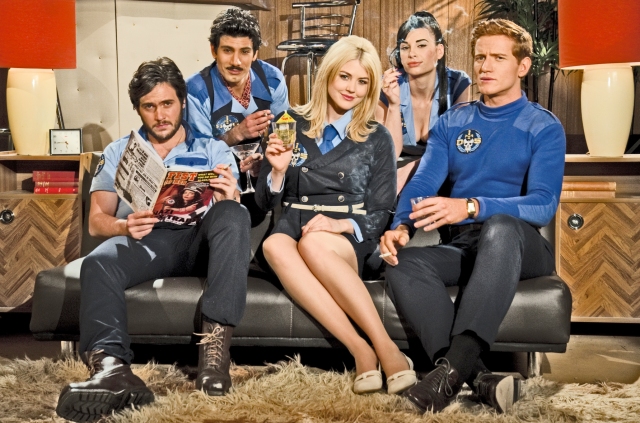 Interview with Dario Russo, director and one half of the writing duo behind Danger 5, a new SBS series.

There are certain things you don’t see on television very often. Pterodactyls in bar fights, death by phone call, or the abduction of major world landmarks would probably be high on this list. Last Monday, the first episode of Danger 5 aired on SBS, and yes, it’s pretty much as awesome as it sounds.

This program follows a somewhat Captain Planet-esque quintet of ‘heroes’. However, Jackson (David Ashby), Pierre (Aldo Mignone), Ilsa (Natasa Ristic), Tucker (Sean James Murphy) and Claire (Amanda Simons) are not out to save the environment. They’re here to protect a 1960s style world against Adolf Hitler.

Dario Russo is a South Australian writer and director. When I speak to him, he is friendly, down to earth, and has just “spent the day in front of [his] laptop”. If  the roles were reversed, and I were the one with a strong history of success on the short film festival circuit, a viral YouTube video series and a television show being currently aired, I don’t know if I could boast the same.

He has has been making short films since high school. One of these films, Marsh Beast, which portrays a giant crocodile eating people in New Mexico, led to a South Australian youth film festival award in 2003 and also to an Adelaide moment with Cameron Edser and Michael Richards. Richards and Edser now join Russo on the Danger 5 team, leading the stop motion animation for the series.

During his third year of Screen Production at Flinders University, he created Italian Spiderman, a trailer for a supposedly “lost Italian film”. It went viral, with over four million views and as a result attracted funding from the South Australian Film Corporation. This allowed the team to produce a ten episode web series, continuing the story. It was the popularity and originality of this which prompted interest from SBS, who offered Russo and his writing partner Ashby the opportunity to come up with a new series – Danger 5.

The series is original on a number of levels. There is a strong “pulp” feel, influenced both by the director’s love of old television shows including Power Rangers and Miami Vice, and by 1940s “men’s adventure magazines”. “These magazines would show things like Nazi panthers” and other borderline ridiculous, ‘patriotic’ images, which laid the groundwork for both the look and the content of Danger 5.

When asked about how the series navigates the line between political correctness and humour, Russo paraphrases Mel Brooks’ view that it is the “right of people to lampoon Nazism” and that “we tried to be as respectful as possible.” Danger 5 steers clear of being too comparable to the real event, by being set in a different era, and avoiding specific historical events. “It’s reduced to good vs. evil.”

Plus, there are people cloning dinosaurs.

Despite having only aired on SBS for the first time last Monday, the show already has a strong following thanks to a five part online prequel “Danger 5: The Diamond Girls“. When asked about the potential push of original television series to the internet, Russo answered that the internet and television “are not mutually exclusive” and that in future television series they will “work together”.

He doesn’t believe that the future of television series lies with the internet, stating instead that there will be “cross pollination”. Certainly in the case of Danger 5, there is a symbiosis between the program seen on our screens, and the supplementary material online. Visiting their website, there is a one-off issue of “Danger! Monthly“, a magazine reminiscent of the ones which prompted the series, and is something the characters in the show might read.

The main issue for web-series is that there is “no set model for monetisation” for the internet, which would make it difficult for new series to exist and continue purely in an online format. However, it is this commercialisation of television which also provides a huge barrier to originality on our screens.

I put to Russo that for a while it seemed like television was sinking in to a big hole – full of things like The Biggest Loser, Masterchef, spin offs of Law and Order and CSI, while shows that demonstrated any sort of individuality or originality were quickly snuffed out. I asked  if he thought if this was improving, or if we were headed in to a downward spiral. He stated that the main problem is context, and that there are a lot of commercial factors as well as a “cookie cutter” trap. Generally, new narrative is not picked up as much as formats which can just be mildly adapted for different markets.

Russo said that he’s “surprised that Danger 5 exists, and got a chance”, and that it was due to SBS being willing to take a risk.