Posted on December 19, 2011 by Adam vanLangenberg

Before we dive in, let’s take a quick quiz:

1)   If a player lands on Free Parking, do they collect all of the paid taxes?

3)   Exactly how long can you choose to remain in jail?

If you answered any of those questions then you are going to get a PUNCH IN THE FACE WITH A BOBCAT. Not a friendly punch either, but a really hard one complete with rusty nails and racist slurs. Let me get this straight, Monopoly is not something that decent people involve themselves with. Decent people donate to charity, feed the homeless and host the occasional swingers party. Monopoly players whittle kittens. 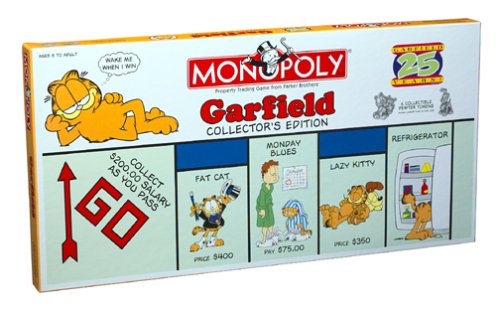 Chances are, it’s not your fault and it’s never  too late to change. You were probably born into a family that played Monopoly. You’ve probably never seen any other games with the possible exception of Cluedo. Your friends probably enable your habit by agreeing to play with you. I’m not here to judge (not true), I’m here to help. We can fight this thing together and venture out into a brand new day.

Close your eyes, then open them again so you can continue reading. Take deep breaths. Imagine floating in a pool of warm, rose-scented water. Do not imagine yourself floating naked, you are probably ugly. Take your mind to a safe place so that I may slowly and gleefully strip the layers of Monopoly confusion from you.

It’s time for an intervention.

Let’s begin by exploring why your appreciation of the game is so very wrong.

Why does Monopoly suck so bad, other than the sheer amount of dead babies that go into its production? First of all it’s the loss of control, which might be fine for the submissives out there,  but most people don’t like it. Any game that requires you to roll dice to move around the board automatically loses some of my respect. A good game is based around decisions. While an element of luck is vital in most games, the most painfully tense moments within a gaming experience should not be down to the roll of a pair of dice. Tension should be created by decisions you are forced to make where each of your options are simultaneously the best and the worst move you could make. In Monopoly, all of the tension comes from needing to roll a 5 in order to buy the property you really want and hoping you don’t roll a 6 which will land you on your opponent’s railway station. You have so little influence you eventually stop caring about what happens. That isn’t tension, it’s Russian roulette with a cap gun.

This is boring! Let's play Boggle!

Additionally, this is a game where once you hit a certain point, all you can do is watch your friends beat you into the depths of financial ruin. Each circuit of the board is another boringly painful session of counting out money, handing it over and mortgaging more properties for the privilege of doing it again. There are games out there that can make this type of thing fun but Monopoly is not one of them. What happens when you finally run out of money? You’re out. No fanfare, no golden handshake, no farewell party complete with strippers and regret. You have the fun of going and making everybody else sandwiches while they continue playing. A good game gives you better opportunities to recover from loss and doesn’t send you to your room when you screw up.

Finally, why is it so freaking long? I would have played this game dozens of times as a kid and I can’t remember not getting bored and actually finishing a game. When I’m heavily involved in a game, knee-deep in cardboard pieces and sweat I want to see it out to its bitter end, not look at my watch and decide to call it. Poor form, Parker Brothers, poor form.

Hopefully you now won’t be able to look at Monopoly without being overwhelmed by its flaws. What do you play instead? Here I’m going to assume that you aren’t familiar with good board games and would typically fall back on Cluedo, Pictionary and drunken Twister. I’m going to list three of my favourite ‘gateway’ games. A gateway game is a board game that is only slightly more complicated than your typical fare, but adds a significant amount of depth, replayability and self-respect. I won’t review these in full here and will only give an overview.

Ticket to Ride: A wonderful game where players compete to build railway lines connecting various cities. The basic game is set in America but later versions feature different countries. Lots of good decisions to make in this game where laying a railroad at the wrong time can tip your hand but could potentially hurt an opponent. 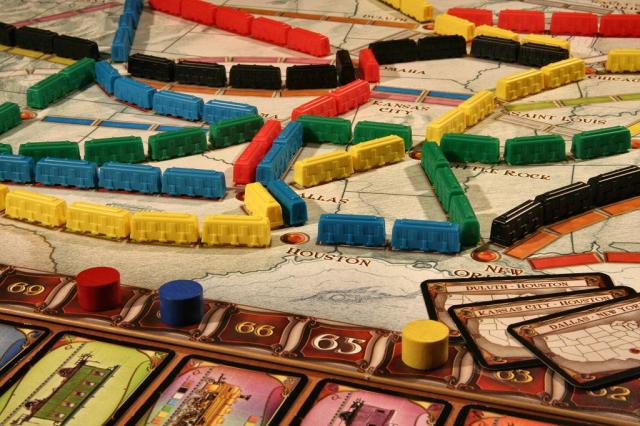 Yes, train games can be fun

Carcassonne: A tile-laying game involving the creation of a land complete with cities, fields and roads with players fighting over who gets control of what. There is a fairly decent element of luck in this game as it involves drawing tiles from a bag, however the real decision comes from determining where best to play the tile.

Also, laying tiles can be fun

The Settlers of Catan: Players create villages on a hexagonally tiled land and try to gather as many resources as possible to grow their empire. This one has the biggest luck factor of all but this can be minimised through careful play.

Any of these games would serve as a wonderful foray into proper board gaming. You’ll get of taste of what games can be like when they’re designed to be playable, not sellable. A board game should be an experience. You want to be able to talk about it afterwards, to people who don’t know the game and don’t care. As your collection grows larger you will find more and more friends dropping off your address book until your social circle consists of four or five fellow geeks salivating at the prospect of smelling the fresh cardboard of a brand new game.

That, my friends, is heaven.

Comic book defiler, board game desecrater, unwanted felon. @vanAdamme
View all posts by Adam vanLangenberg →
This entry was posted in Gaming (Board), Reviews and tagged carcassonne, monopoly, settlers of catan, ticket to ride. Bookmark the permalink.