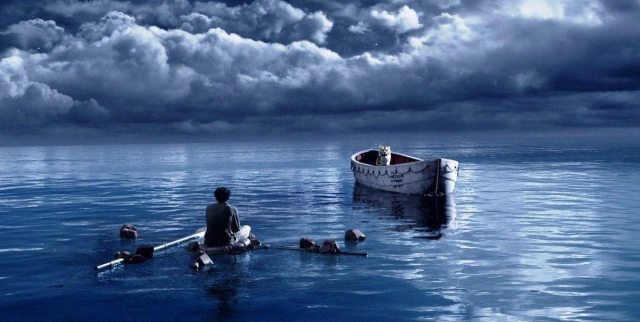 The story is structured in a vaguely Titanic-esque way. Writer finds man to tell him about his infamous shipwreck story, which he has been told will “make you believe in God”. From the comfort of a well-lit and cosy living room, Pi begins his story through a long flashback.

Pi is a boy named after a swimming pool and who follows three separate religions, much to his father and brother’s amusement. Having spent his childhood growing up in a zoo in Pondicherry, French India, his father decides to sell up and move the family and a few animals to Canada, which is how Pi finds himself on a Japanese ship in the middle of the Pacific as a storm is about to hit. Forced into a lifeboat, Pi is the only survivor, bar a hyena, a rat, a zebra with a broken leg, an orangutan, and a tiger. 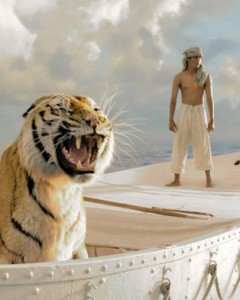 This film is based on the 2001 novel by Yann Martel, a book where the author’s note legitimately blurs the line between truth and fiction. It was adapted for the screen by David Magee and directed by Ang Lee, who it would seem is the man to finally make 3D a worthwhile experience.

For me, Life of Pi was consistently entertaining and overall thought-provoking. The visual elements were constantly surprising, from the opening credits, the transitions, to the mind bendingly spectacular flashback to Piscine Molitor – the pool that Pi was named after. I could have happily re-watched the latter scene over and over again just to try and get my head around the camera angles and editing.

What’s more remarkable though is that this film is Suraj Sharma’s first experience with acting. He turned up alongside 3000 others to the auditions because his brother asked him to, and promised him a free meal. He commands every scene he is in which is no mean feat when in most of these scenes he is alone – but for a tiger.

Life of Pi is the kind of story your English teacher would have happily dissected three times over, and then asked you to reassemble into an essay in fifty highly pressurised minutes. It is filled with philosophy, metaphor and ideas about human (and animal) nature, and is one of those rare films that will have you thinking about specific aspects of it days later. It also provides enough material to fuel several dinner parties worth of conversation and theory swapping.

The film will appeal to a wide audience, with the exception of those who need action in order to sustain their interest for 127 minutes (I’m looking at you, man in front of me who spent the entire film focussed on chewing what seemed like a never-ending bag of crisps as loudly as possible). It also isn’t a film for children. Yes it has animals, no that doesn’t make it Madagascar 4: The Pacific’s Most Stranded.

This entry was posted in Books, Film, Reviews and tagged Ang Lee, Life of Pi, Suraj Sharma. Bookmark the permalink.

1 Response to LIFE OF PI [REVIEW]