THE MUPPETS: PONDERINGS OF A MUPPETS VIRGIN [REVIEW] 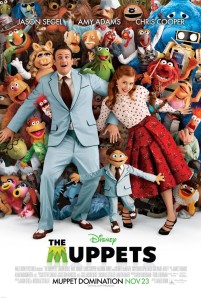 I want to start by confessing that before this week, I had never seen a Muppets movie. This, at least in the YouTube community, can cause a person to be put in the ‘impure fan’ box and prompts the typical “GET OFF MY LAWN” response of the few people who I assume camp out on certain YouTube pages, jealously guarding their interests.

With this being the case, I felt slightly out of place in the session I attended, and not just because I was more familiar with the Portuguese ‘Tiny Fuppets’ or that I entered an iteration loop of doom trying to figure out whether The Muppets were on Sesame Street or not. The group of men sitting to the right of me not only were clearly very familiar with the characters, they were also familiar with the songs. They alternated between uproarious laughter, excited whispering any time a new character came on, and joined in most of the songs. It was brilliant.

The film is centred around Walter (voiced by Peter Linz), a puppet and the brother of Gary (Jason Segel). Walter struggles with the limitations of life as a puppet, until he first sees an episode of “The Muppet Show”. He quickly becomes their biggest fan despite their apparent slump in popularity, and is teased about being “from 1979” when he dresses as Kermit for Halloween. Years later, Walter and Gary still live together, and when Gary plans a trip to Los Angeles to celebrate his ten year anniversary with girlfriend Mary (Amy Adams), he invites Walter along.

A song and a dance later, the trio are on a tour of the now derelict Muppet Theatre. Walter sneaks into Kermit’s office, and overhears a conversation that reveals that the theatre is to be sold to Tex Richman (Chris Cooper) who plans to tear everything down to drill for oil. The only hope for saving the grounds is if the Muppets can raise ten million dollars.

What ensues is a frantic attempt to re-unite the scattered Muppets, maniacal laughter, a confrontation with ‘The Moopets’, relationship drama and a celebrity cameo-studded telethon in a two hour time slot made available after the cancelling of top rating television show ‘Punch Teacher’.

It’s at this point I need to hold myself back from recounting the remainder of the plot. The problem is that everything is so ridiculously quotable that the temptation to ruin everything for everyone is quite powerful. 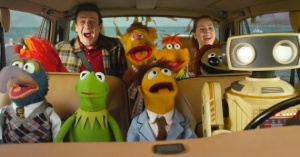 I liked this film for a number of reasons. Firstly, every minute of it was entertaining. It had musical numbers which weren’t overdone and thus were not seen as bathroom break opportunities. Secondly, it’s a film which is so densely packed with dialogue and things to look at, it seems like something you could watch multiple times and still get something new from it with each viewing. Finally, it provided opportunity for a three part film and television dot-to-dot, which appeals both to my inner five year old, and to the part of me that enjoys the cross referencing of Yoda and E.T. in E.T and the Star Wars movies.

For those of you playing at home, use coloured pencils (to make a rainbow connection):

Dot-to-dots which form either a triangle or a really thick line aside, I have nothing bad to say about this film. That’s actually pretty unusual, so I’d recommend you strap on your fart shoes and get into a cinema. Preferably one where the audience is singing along.